Anyone who greatly enjoys a well-made Saison should also greatly enjoy a well-made Pilsner. This is something that I firmly believe. Yeast character aside, both beers tend to be blonde, hoppy, and supremely drinkable. The recipes for each tend to favor simplicity and can look quite similar if not interchangeable. My favorite examples of each style have a firm, but not overpowering hop bitterness that is backed up by noticeable noble hop characteristics and a clean Pilsen malt backbone. In the case of Saison, the forward yeast character adds esters and phenols that are obviously not present in a Pilsner, but I find the overall presentation of the two styles quite similar. For Saisons, I tend to favor the low gravity, cleanly fermented variety over the higher gravity, ester and phenol bombs that many associate with the Saison category. I do enjoy a stronger version on occasion, but favor calling them Super Saisons as I think they really are a different beast. For Pilsners, I tend to favor the more flavorful and bitter German and Czech varieties over the simplified American version. Trumer Pils and Pilsner Urquell are two good examples that come to mind.

In my Table Saison – Open Fermentation vs. Closed experiment, I found that not installing an airlock on half of the batch resulted in two very different beers with the open version having a considerably cleaner yeast character. Being curious how this experiment might play out with a Pilsner, I convinced my friend Bob (a fellow lover of Saisons and Pilsners) to help me execute this experiment.

The approach for this experiment was very similar to the previous Table Saison experiment, produce a single wort and split it between two identical fermentors, one of which did not have an airlock installed. For our Pilsner recipe we wanted to keep is extremely simple with the majority of the character coming from late additions of noble hops. We chose to take a single malt approach and use 100% continental Pilsner malt in conjunction with using a double decoction for the mash. We had hoped that the decoction would add some extra character, but more than anything, Bob had just purchased a new induction cooktop and we were both very curious to see how well it would work as a secondary heat source for decoctions or turbid mashing. For hops, we chose to bitter with Sterling, a higher-alpha pseudo-noble type hop, and use Hallertau Mittelfrueh late in the boil and in the whirlpool. We planned to ferment with Wyeast 2124 Bohemian Lager and hold primary fermentation in the low to mid 50’s before executing a diacetyl rest and transferring to kegs to lager.

Brew day for this beer took place on November 8, 2018. We followed the decoction mashing schedule outlined above and found that the induction burner setup worked exceptionally well for decoction mashing. My previous attempts at decoction mashing had all been done with a direct-fired burner and kettle setup which required constant stirring to avoid scorching. We began this mash with that same cautious approach, but eventually discovered that the heat was so evenly distributed with Bob’s induction burner and kettle that scorching was not possible. To boil the decoction, we left the lid on the kettle and set the 1800W induction cooker to full output. We occasionally checked on the decoction to make sure it wasn’t scorching and not once did we find the mash trying to stick to the kettle. I was shockingly impressed. At a later date, I borrowed Bob’s induction burner and kettle for a turbid mash and it performed exceptionally well in that situation as well.

At the end of the decoction, we performed a mash-out at 170°F (76.6°C) before batch sparging. The first step saw approximately 5 gallons of 1.089 SG wort collected after the mash tun had been completely drained. Next, 10.25gal of sparge water was added back to the mash tun and allowed to recirculate before the mash tun was, again, completely drained. I personally hadn’t batch sparged in years, but after being reminded of how much time it can potentially save on a brew day, I have chosen to revisit this method for future brews. We ended up collecting 15.25gal of wort at 1.045 SG which was boiled for 90 minutes and hopped per the above recipe.

After being chilled, 12 gallons of 1.053 SG wort was equally divided between two identical 7gal FerMonster fermentors. The yeast was then pitched and the wort was maintained in a fermentation chamber at 54°F (12.2°C). The only difference between to two vessels was that one had an airlock installed and the other simply had aluminum foil loosely placed over the top. Primary fermentation was left in this configuration for the first 7 days, after which an airlock was placed on the open fermented vessel. At that point, fermentation activity had slowed considerably, but the primary fermentation step was maintained for another 7 days followed by a Diacetyl rest at 62°F (16.6°C) for 3 days. Using the racking ports on the fermentors, the beer was transferred to kegs where it would be lagered for 30 days before force carbonating and then serving. During transfer, the final gravity of the open fermented beer was measured to be 1.011 FG while the traditional, closed fermented beer was measured to be 1.010 FG. In my previous experiment, the open fermented batch finished slightly lower than the closed, but this experiment produced the opposite result. That being said, a difference of no more than one gravity point could be considered noise and further data points are required to really develop a trend. Also, both experiments I have done so far have been fairly low OG beers. I believe you would start to see the difference in final gravity increase as the OG also increased.

Once both beers were ready to serve, I made several visits to Bob’s house where I sampled both beers. In my non-blind tasting of these beers, I perceived the closed fermented beer to have a crisper and more clean profile while the open fermented beer seemed slightly more full and rounded. However, when tasted in a blind triangle test, I was unable to tell the difference between the beers. When I had previously sampled them in a non-blind manner, I was drinking full pours and occasionally going back and forth between the two beers, giving my palette plenty of time to adjust to each beer. This makes me wonder if the smaller pour and smaller sample nature of the triangle test actually makes it more difficult to distinguish between the two beers due to how quickly the beers are evaluated. That being said, the differences I am claiming to have perceived are extremely minor and for most intents and purposes they were indistinguishable.

Both beers were cleanly fermented lagers with moderate floral hop aroma and flavor supported by clean Pilsen malt character. I did perceive the open fermented batch having a slightly fuller body and this is potentially supported by the fact that it finished slightly higher than the other beer. Both beers were in the range of medium-light to medium body with moderate creaminess and, surprisingly, both of these beers exhibited exceptional head retention regardless of the extensive time spent in the protein rest range during the decoction mash. I was quite pleased overall with how these beers turned out and I give much of that credit to Bob’s ability to produce a cleanly fermented lager. I would also add that the hop aroma and flavor in this beer was much stronger than I prefer for a pilsner and for that reason I would reduce both additions by at least half for future batches along with increasing the bittering addition slightly. Stylistic inaccuracies aside, we did enter both beers in a 500+ entry competition and received a bronze medal for the open fermented batch. The open fermented batch was entered as a 3B- Czech Premium Pale Lager and the closed fermented batch was entered as a 5D – German Pils.

Based on my previous experience with open fermentation, I expected the open-fermented version of this beer to be more dry and more clean than the closed-fermented version, but that wasn’t the case for this experiment. The two beers produced in this experiment were both extremely similar and very difficult to distinguish. Given that lagers generally exhibit much cleaner fermentation character than ales, it would make sense that the differences between these two beers might be subtler than the same experiment performed on a beer that is much more yeast-forward such as a Saison. Yet, many lager breweries around the world choose to open ferment their lagers and claim it makes a difference. Why is this?

I believe the major process variables that these breweries are attempting to address with open fermentation are pressure and oxygenation. At the commercial scale, the shape of standard conical fermentors tends to cause increased hydrostatic pressure on the wort within. In brief, hydrostatic pressure is the force exerted on the wort in the lower part of the fermentor by the wort in the upper part of the fermentor. There is also a minor force from head pressure placed on the wort when an airlock of blow-off bucket is employed. While this force is likely not as significant as that from hydrostatic pressure, it can be addressed by simply performing an open fermentation. Another way that pressure can be manipulated is by changing the shape of the fermentor in order to reduce hydrostatic pressure. This approach can be seen in the wide and shallow open fermentors employed by breweries such as Sierra Nevada and Anchor Brewing Company. One could logically deduce that any force placed on a fermentation could potentially cause additional fermentation stress and result in finished beer that has more yeast byproducts than are typically desired in a lager, but I have not yet found any research that supports this theory.

In addition to the pressure change caused by open fermentation, there is also a change in how much oxygen is available during the early stages of fermentation. When a standard closed fermentation is performed, the oxygen present in and on top of the wort will quickly be used up by the yeast or dissipate naturally, at which point there is little to no oxygen left for the yeast to use. In an open fermentation, however, there a constant supply of ambient oxygen available to the yeast. For this reason, a greater availability of oxygen also has the potential to decrease fermentation stress and reduce unwanted yeast byproducts such as esters and phenols.

Contrary to the results I have found in my own experiments, many resources claim that fermenting under pressure actually reduces esters in fermentation. My intent with these experiments is not to try and prove anyone wrong, but simply to better understand how manipulation of these brewing process variables impact the beer produced. For open fermentation, there are multiple process variables being manipulated at the same time so understanding exactly what is taking place becomes more complicated to explain. However, I am committed to learning more about open fermentation and will continue to do further experiments such as this one. 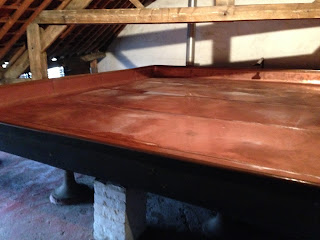 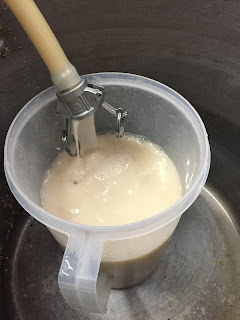